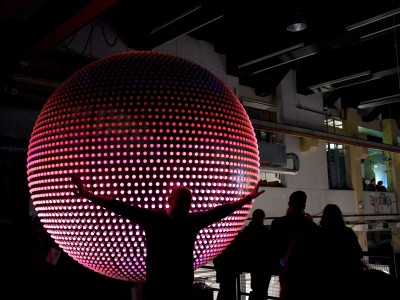 'If you can’t find something to excite you at Kinetica you probably don’t have a pulse.'
The Daily Telegraph
'If you like your art to be moving in all senses, this is for you.'
The Independent

Kinetica Art Fair is produced by Kinetica Museum and is the first of its kind in the UK. It brings together galleries, art organisations and curatorial groups from around the world who focus on kinetic, electronic, robotic, sound, light, time-based and multi-disciplinary new media art, science and technology.
In collaboration with Ambika P3 for 2013 Kinetica is hosting the work of over 45 galleries and art organisations  nationally and internationally, with representatives from UK, France, USA, Poland, Holland, Spain, Italy, Hungary, Indonesia and Japan, collectively showing over 400 works of art. 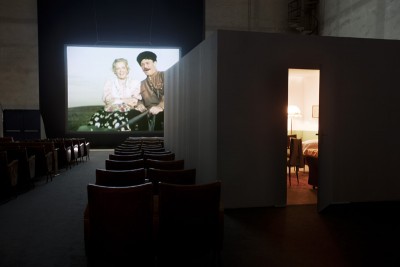 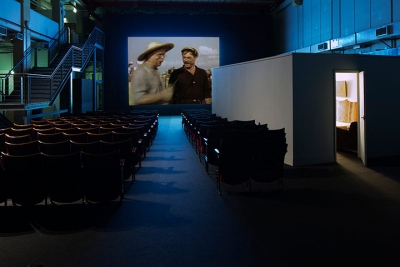 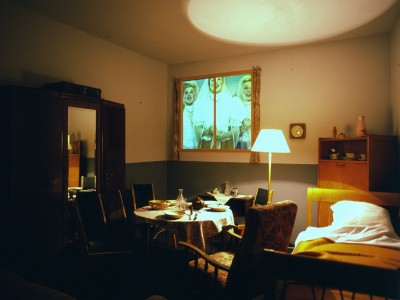 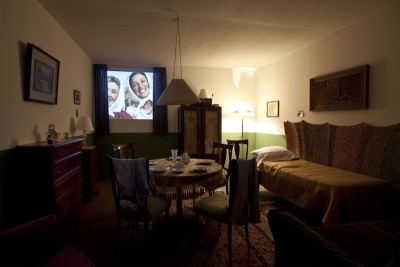 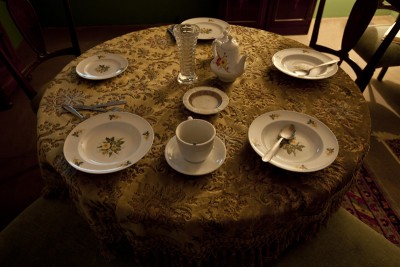 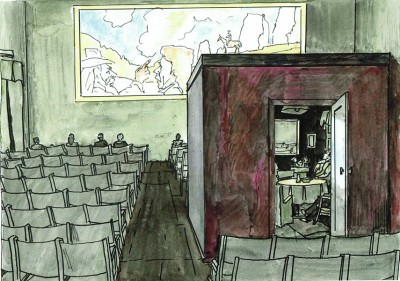 Sprovieri Gallery and Ambika P3 are delighted to present a major installation by internationally celebrated Russian artists Ilya and Emilia Kabakov, influential pioneers of installation art. Staged by the artists in the monumental subterranean space of Ambika P3, The Happiest Man explores the fragile boundaries between reality and imagination, fact and fiction, life and art.

Ilya and Emilia Kabakov have collaborated over many years to make extraordinary installations – whole environments that fuse elements of the everyday with those of the imagination. With a light touch, they combine references to history, art, literature and philosophy, and often leave the spectator poised between utopia and disenchantment, nostalgia and marvel.

In The Happiest Man, the audience enters a large constructed cinema, with classic cinema chairs where clips are projected featuring rare Russian colour films of rural idyll from the 30’s, 40’s and 50’s – scenes of happy people running, dancing and singing. Unexpectedly, within the cinema space, there is also a room, perfect in every detail, where in the mind of the artists lives ‘the happiest man’ who continually watches the projected films on the screen though his window. The spectator can choose to sit in the main cinema, or enter the room and become ‘The Happiest Man’ – immersed in the illusion, magic and distraction of the scenes that more than fill the domestic environment.

The work is a poignant yet ironic metaphor of the search for a way to flee from reality; happiness is drawn from fictional films made in some of Russia’s darkest years. The ‘Happiest Man’ has found a permanent escape from reality – watching beautiful images - but the utopia of this continuous escape also illuminates the disenchantment of daily life.

While the Kabakovs’ work is deeply rooted in the Soviet social and cultural context in which they came of age, it still attains a universal significance. Highly influential, the Kabukovs’ have created large-scale projects and ambitious installations throughout the world including the Venice Biennial (1993, 1995, 2003, 2007), the São Paulo Biennial (2010) and the Singapore Biennial (2008). They were the first living artists to show at the State Hermitage Museum, St Petersburg and also presented the first exhibition at the Garage Center for Contemporary Culture, Moscow.

Parallel to the installation at Ambika P3, Sprovieri Gallery will present a selection of paintings from Kabakovs’ series Mountains which were executed in 2010.

About Ilya & Emilia Kabakov:
Ilya Kabakov was born in Dnepropetrovsk, Soviet Union, in 1933. He studied at the VA Surikov Art Academy in Moscow, and began his career as a children's book illustrator during the 1950's. He was part of a group of Conceptual artists in Moscow who worked outside the official Soviet art system. In 1985 he received his first solo show exhibition at Dina Vierny Gallery, Paris, and he moved to the West two years later taking up a six months residency at Kunstverein Graz, Austria. In 1988 Kabakov began working with his future wife Emilia (they were to be married in 1992). From this point onwards, all their work was collaborative, in different proportions according to the specific project involved. Today Kabakov is recognized as the most important Russian artist to have emerged in the late 20th century. His installations speak as much about conditions in post-Stalinist Russia as they do about the human condition universally.

Emilia Kabakov (nee Kanevsky) was born in Dnepropetrovsk, Soviet Union, in 1945. She attended the Music College in Irkutsk in addition to studying Spanish language and literature at the Moscow University. She immigrated to Israel in 1973, and moved to New York in 1975, where she worked as a curator and art dealer.

Their work has been shown in such venues as the Museum of Modern Art, the Hirshhorn Museum in Washington DC, the Stedelijk Museum in Amsterdam, Documenta IX, at the Whitney Biennial in 1997 and the State Hermitage Museum in St. Petersburg among others. In 1993 they represented Russia at the 45th Venice Biennale with their installation The Red Pavilion. The Kabakovs have also completed many important public commissions throughout Europe and have received a number of honors and awards, including the Oscar Kokoschka Preis, Vienna, in 2002 and the Chevalier des Arts et des Lettres, Paris, in 1995. Ilya and Emilia Kabakov became the first living Russian artists to have their work exhibited in the Hermitage Museum.

The Kabakovs live and work in Long Island. 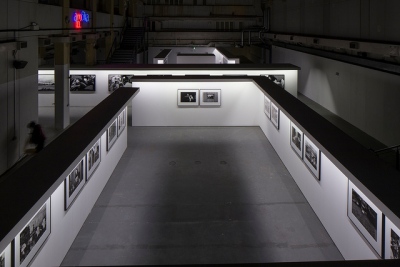 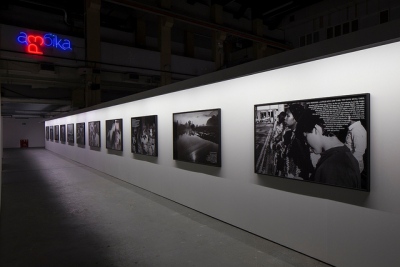 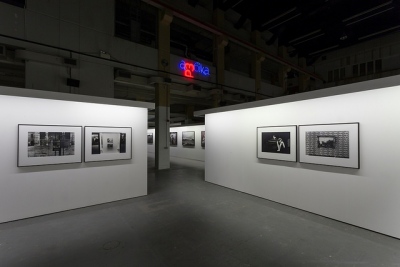 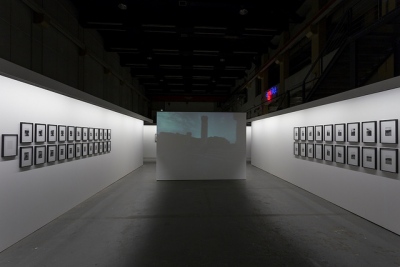 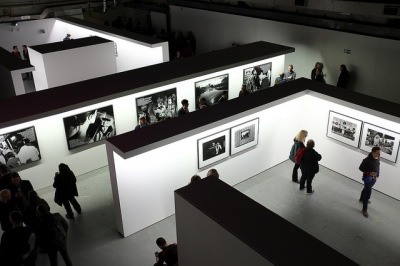 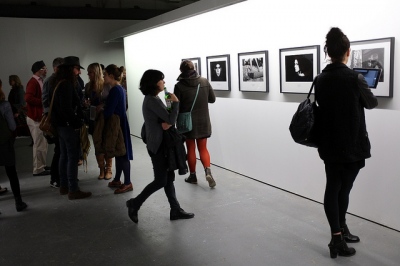 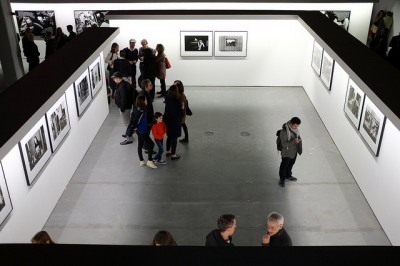 Ambika P3 is delighted to present A Sense of Place, a major exhibition of the work of Victor Burgin. Five recent digital projection pieces are complemented by earlier photo-text works exploring relations between place, memory and image.

Victor Burgin first came to prominence in the late 1960s as an originator of Conceptual Art, when his work appeared in such key exhibitions as When Attitudes Become Form (1969) and Information (1970). He has since remained one of the most consistently influential artists and art theorists of his generation.

Burgin’s work is concerned with the ways real objects in actual space are mediated through memory and fantasy—the way ‘space’ becomes place. To this end he explores relationships between words and images—which he sees not as separate entities but rather as a hybrid form producing a ‘virtual’, psychological, image.

The built environment—as a theatre of wishes and fears about past, present and future—is at the forefront of Burgin’s works, which move through promenades and panoramas. The image- text pieces progress along the gallery wall, or wrap around an entire space, or (in later projection pieces) exploit tracking and pan movements familiar from film. These later works answer our frenetic media environment with a contemplative conception of the hybrid virtual image—moving in permanently closed loops, but generating perpetually open spirals of time and memory.

Victor Burgin’s new work for the Ambika P3 exhibition, Mirror Lake, is a response to the Seth Peterson Cottage, designed by Frank Lloyd Wright and built in 1958 in what is now Mirror Lake State Park, Wisconsin.

A Sense of Place is curated by David Campany and Michael Mazière.

It is supported by Arts Council England, Ambika P3, The University of Westminster, The Henry Moore Foundation, The Elephant Trust and Galerie Thomas Zander, Cologne.

CREAM (the Centre for Research and Education in the Arts and Media) presents Victor Burgin in conversation with curator David Campany. This event will take place in the Hogg Lecture Theatre, University of Westminster, 35 Marylebone Road, London, NW1 5LS.

Encompassing Burgin's paper-based works from the late-60s to date, this exhibition will focus on his radical intervention into mainstream media through the interplay of text and image.

About Victor Burgin:
Victor Burgin taught at the Polytechnic of Central London (now the University of Westminster) from 1973 to 1988. He was nominated for the Turner Prize in 1986. His achievements as a visual artist are unique in that he is equally influential both as a practitioner and as a theorist. His still and moving image works, and his extensive and widely translated writings, have had a profound effect on the landscape, language and teaching of the visual arts in general, and photography in particular, both in Britain and abroad. 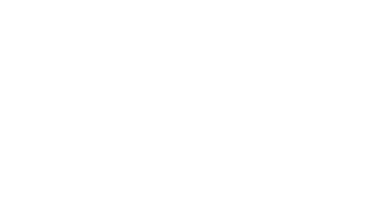