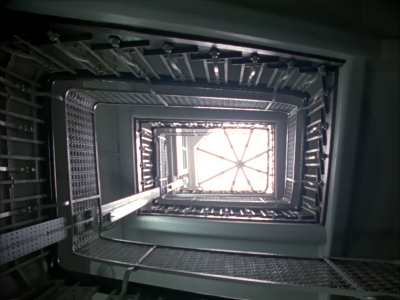 Falling Away – a prelude

This online event is the prelude to an exhibition of Catherine Yass’s films at Ambika P3. The exhibition, titled Falling Away, showcases a selection of Yass’ vertiginous films of architectural structures from the past 20 years. Initially scheduled in the LFA 2020 ‘Power’ programme, it has been postponed to the summer of 2021.

Seven films will be brought together for the most comprehensive show of Yass’s work to date. The buildings in her films are undergoing demolition or construction, some are falling into disrepair: as they crumble, so too do the powers behind them.

The viewer is drawn into dizzying spaces as the camera is turned upside down, plunged into water, lowered from cranes, buried under falling rubble. The exhibition addresses our society’s ambivalent relationship with modernity and the material structures that give it form. By addressing urgent issues around architecture and the institutions it embodies, it will contribute to current debates about how built environments shape our lives.

In anticipation of this Ambika P3 show, we present one of Yass’ films, Royal London (2018), together with an essay written for the upcoming exhibition catalogue by Christopher Kul-Want.

Royal London is a film of the Royal London Hospital as it is being demolished. The camera follows the process from inside the building, eventually being covered by rubble and dying with the hospital. The hospital is a living organism, and while some of its buildings are being rebuilt another part of its body is being demolished. As a place that has witnessed births, deaths and all the states in between since 1740, the hospital is a place equally about death as life. It is not only the hospital that is being dismantled. The letters NHS are just discernible on the dust sheets coming down with the rubble, unintentionally hinting at the steady erosion of NHS services, and the stress that they are currently under. In the midst of this collapse, the hospital's title Royal London suggests that both London and our sense of statehood are under threat of destruction, especially in these historical moments of uncertainty.

Falling Away is co-curated by filmmaker and Ambika P3’s curator Michael Mazière with Davide Deriu, Reader in Architectural History and Theory at the University of Westminster and British Academy Mid-Career Fellow (2019/20). The event is situated within the Vertigo in the City project led by Deriu, which started in 2015 with a series of conversations between the sciences, arts and humanities. The preliminary phase, funded by the Wellcome Trust, culminated in a first symposium keynoted by Catherine Yass. This new exhibition builds on the foundations laid by those early activities and is part of a wider public engagement programme that focuses on vertigo and verticality in relation to the built environment. It includes a multidisciplinary symposium at the University of Westminster and a series of related screenings at the Regent Street Cinema. Due to the COVID-19 outbreak all activities have been rescheduled to 2021.

The programme is generously supported by:

Together with the film screening, we are presenting a new essay about Royal London written by Christopher Kul-Want, which will be published in the Falling Away catalogue in 2021.

Christopher Kul-Want is a writer and leader of the Masters in Research course in Art Theory and Philosophy at Central Saint Martins, University of the Arts, London.